Unaware that March 2nd was World Book Day, I stumbled across this tweet from a fellow Chemist (and Nature Chemistry’s Editor):

And my top 10 influential book list was born, interspersed with personal anecdotes and such. 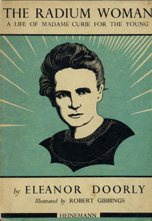 Looking back, I was lucky to have come across the last two books above with Wikipedia describing them as well-received children’s books. My parents did not buy them for me, I just remember the books being old and worn and I somehow stumbled on them in one of the rooms at home. Regardless, I have my parent’s to thank for the introduction.

Later Years (From Fiction to Non-fiction)

2 thoughts on “In honor of World Book Day”

This site uses Akismet to reduce spam. Learn how your comment data is processed.